On International Youth Day, a new generation of feminist activists have a powerful message for the nation’s politicians

To mark International Youth Day, youth activists from Plan International Australia, the charity for girls’ equality, have today presented the Government with a petition of their powerful recommendations on how to improve the toxic culture of Parliament House and create an environment free of misogyny and sexual harassment.

More than 1,300 Australians have signed the youth activists’ petition, underscoring that serious change is urgently needed in our nation’s parliament.

Last Friday, the youth activists met cross-party MPs in a frank and empowering conversation where they laid out their recommendation on how to make Australia’s Parliament safer for women. These recommendations include incorporating proper workplace training, stricter quotas, consent education, emerging leadership programs and creating clear pathways for young women and non binary people to enter the political sphere.

Shadow Minister for Youth Amanda Rishworth confirmed she has submitted the youth activists’ recommendations to an independent and wide-ranging review of workplace culture at Parliament House by Sex Discrimination Commissioner Kate Jenkins, due later this year.

In their meeting with the MPs, the youth activists also noted the flaws in a recently completed report into the parliamentary workplace by the Department of Prime Minister and Cabinet’s deputy secretary Stephanie Foster, of which all 10 recommendations were adopted by the Morrison government.

The youth activists, along with Plan International Australia, welcomed the Government’s implementation of the report’s recommendations, but believed these could have reached further, in the following ways:

– Cultural change will only occur in Parliament with comprehensive and ongoing mandatory training that covers the root causes of harassment and assault – for example, toxic masculinity, power dynamics and gendered attitudes – as well as an understanding of the spectrum of violence and harassment.

– Change must be legislated and embedded into the policies and practices of Parliament in order for it to last.

“We have rallied together on this petition and drafted these recommendations because we don’t see our political leaders representing our views – so we are compelled to do so for them,” said youth activist Margaret Thanos.

“It’s been a year of turmoil for young women and non-binary people looking to Australia’s Parliament for leadership. We’ve watched as accusations of sexual misconduct, assault and harassment have come pouring out of Canberra.”

“Also, all political parties need to actually commit to having a cross section of our society represented within Parliament. We have a huge number of cultural groups in Australia not represented in our Parliament, and it’s time to take that more seriously. The issue with Australia’s Parliament isn’t just that it’s a boys club, it’s a white boys club,” she added.

Just as Brittany Higgins and Grace Tame have demonstrated, the YAS have shown that it is the young women and gender diverse people who are driving real change on this issue.

“Why do I have to give up my dream to be safe,” demanded youth activist Jazmin Wright.

The YAS have highlighted the following specific recommendations that would help ensure they are encouraged and supported to become leaders:

Implement policy to ensure that Parliament – and all workplaces, schools and higher education institutions – is a safe and equal space for all women and one free from misogyny and sexual harassment.

Political parties must act urgently to enforce stricter quotas – not just for women, but for all people of different sexualities, genders, ethnicities and backgrounds who represent the diversity of the country we live in.

Governments need to nurture girls’ leadership ambitions and give them a seat at the decision making table through investing in emerging leadership programs in Australian high schools and providing networks and mentorships to girls to become leaders across government, business and civic life.

Standing in solidarity with girls and young women who report sexual harassment and abuse, and ensuring there is an independent and confidential avenue for girls and women to report such incidents

Ensure no one is forced to choose between leadership and family life, and presenting clear pathways for young women to enter the political sphere

The appointment of women and people of diverse genders and identities to committees or boardrooms must go beyond mere tokenism – they must be respected and given equal power to their male counterparts.

Creating educational and learning environments for all genders around the meaning of consent, both within Parliament and our educational systems

“This is Australia’s #Metoo moment. As Annabel Crabb’s brilliant Ms Represented series has shown, the pace of change on this issue seems to be glacial. It is getting better, but not fast enough and the change is not deep enough. We cannot afford to lose this moment for transformation.

“Sexism is still so pervasive in our society. If young people could see equality in Parliament that would be transformational in helping to model equality in other areas of life and leadership.”

“These extraordinary young activists may be young, but they have an unwavering passion for gender justice and equality. They have told us that change is too slow – so they are stepping up and making that change happen themselves. They seek solidarity and action with others to bring about the changes that will empower all young women to fulfil their potential – including in the political arena.”

“Imagine a Parliament with some of these incredible voices and lived experiences around the table? We are missing out on valuable talent and perspectives.”

“Girls should be growing up believing anything is possible for them, not being forced to choose between leadership aspirations and their own personal safety,” she said.

In response to the reports of sexual misconduct, alleged rape, misogyny and women being victim-blamed in Canberra, Plan International Australia released a report called We Can Lead in March this year, polling young Australian women on their leadership aspirations.

The youth activists are part of the 2021 cohort of the Youth Activist Series (YAS), an exciting annual program run by Plan International Australia and supported by The Body Shop – which displayed the petition in all 65 of its stores – to amplify girls’ and young people’s voices. Aged between 16-24 from Melbourne and Sydney, the youth activists, together with Plan International Australia, fight for long-lasting social change, gender equality and human rights through advocacy, influencing and youth-led research. They are powerful, fearless and feminist. 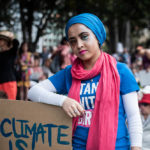