The Rohingya crisis one year on: Friendships lost and found

For girls caught up in the Rohingya crisis, life has been turned upside down.

Having fled persecution in Myanmar, they now live in Kutupalong refugee camp in Bangladesh – one of the largest refugee camps in the world.

Surrounded by nearly a million people, many of whom are strangers, they have all had to adapt to life in an unfamiliar environment.

However, for adolescent girls in particular, this has been especially hard.

Many witnessed and experienced extreme violence when they fled Myanmar, losing friends and loved ones along the way.

Now, with their families fearful for their safety in the camps, and following cultural norms, many are confined to their shelters almost 24 hours a day.

Yet, as these photographs taken by Bangladeshi photographer KM Asad show, when girls do have the opportunity to leave their tents and be themselves, life is completely different.

Visiting the camp with child rights organisation Plan International, Asad documented the friendships girls have formed since arriving in Bangladesh, illustrating the important role friendship plays in building girls’ resilience and helping them keep their hopes and dreams alive. Gulsan (18) and Minara (15) met on a beach while trying to get to Bangladesh 11 months ago. They were together for just three days before Gulsan’s family were able to cross to Bangladesh, leaving Minara behind.

Both thought they would never see each other again, but when Minara arrived in the camp a few weeks later she was overjoyed to find Gulsan living just a few shelters away. With 20 camps and hundreds of blocks within each camp, the girls believe that fate brought them together. They have been best friends ever since. 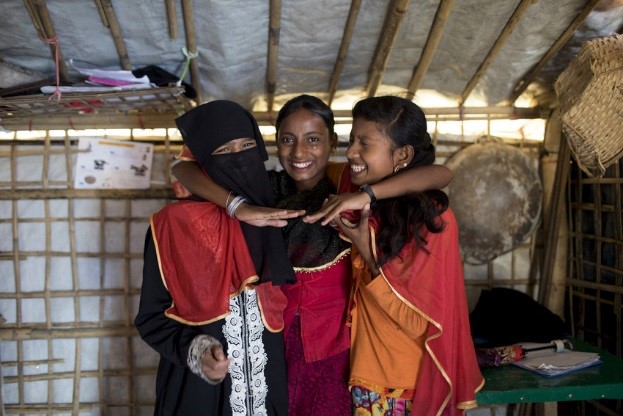 Roshida (12), Sayeka, (12) and Afo Unosrr (12) have been friends since September 2017 and have taken it upon themselves to act as a welcoming committee for new arrivals in the camp.

“They were very nice to me when I first arrived,” says Roshida. “I could not get food as I had only just got here, so they shared theirs with me.”

“We make friends with all new girls when they arrive” explains Sayeka.

“It is hard when you first arrive, so we help by sharing food and clothes,” Mustakima adds.

The girls have been firm friends since August 2017. “We never eat alone. We eat every meal together, no matter what!” says Tasmin Ara. But many of the girls now living in the camp saw their houses go up in flames last year when violence against the Rohingya in Myanmar escalated to extreme levels.

For Afo Unosrr, the compassion shown by the girls already living in the camps when she got there – and the friendliness of the local Bangladeshi population – was a welcome relief. “When we first arrived the villagers helped us. No one attacked us,” she says. In the chaos of leaving home, families and friends were separated, and many have not yet been reunited.

Although Mohesena (13), pictured centre, has made new friends like Nur Hasina (12), left, and Samira (11), she has not forgotten those she lost during the violence last year. “I had many friends back home in Burma. I miss them here,” she says. The same goes for outwardly cheerful Nuscat (11), pictured right with Kawasana, left, Nun Lolima, second left, and Asmida. “We did not find our friends from Myanmar here. I miss them so so much,” she says.

Friendship is vital in humanitarian crises. Research carried out by Plan International has shown that girls in crisis with strong peer networks cope with their situation far better than those without.

Yet there are very few spaces in the camps where girls can get together and make new friends. There are only a limited number of schools, learning centres, and child friendly spaces that those with the freedom to get to can use. Even for girls who do have the ability to move from their shelters, they do not venture far – and certainly not by themselves – as it is not considered safe. “We feel shy to go out without a Hijab,” says Tasmin Ara. “There is a lot of pressure from the community. None of us owns a hijab right now but sometimes our friends can help us.” 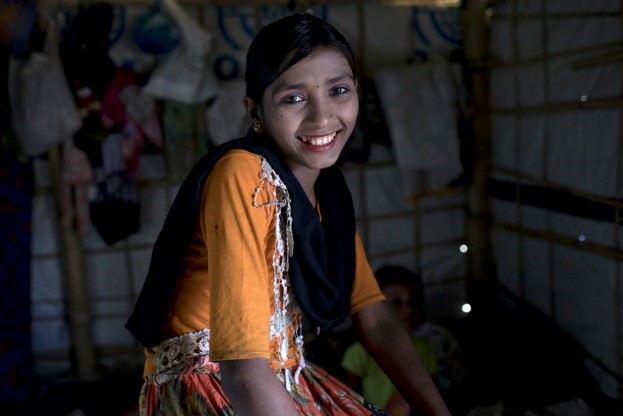 For most girls, with their freedom of movement so tightly restricted, the chance of getting an education is limited.

Bibi Jan (13) is the only one of her close friends who is attending school. Yet there is an overwhelming desire among the girls in the camp to get an education. Rohey a Begum (15) has entrepreneurship on her mind and is determined to become a seamstress. “I want to be more independent,” she says. “I would like a sewing machine and training so I can someday set up a business.” Minara (15), pictured second right, would love the opportunity to go to school and Ruhima (16), far right, used to sew in Burma and is hopeful she will have the chance of vocational training in the camp to help her hone her skills. Yet despite the obvious resilience and adaptability of girls affected by this crisis, they currently have an uncertain future. There is no guarantee the Rohingya population will be permitted any formal education in the camps and there are many girls who, for cultural reasons, remain confined to their shelter, their hopes for a better future slowly drifting away.

According to Orla Murphy, Plan International’s Country Director in Bangladesh, things have to change – and fast.

“One year since the start of this crisis it’s time for the government of Bangladesh and the international community to shift from merely providing emergency needs to thinking about children’s long-term futures.

“Conditions in the camps are much better than they were a year ago, but we speak to girls every day and they all say the same thing. They all want to get an education, to earn a living, to gain more independence and to contribute to their communities, but there are far too few opportunities for them to do this at the moment.

“If we do not want to be responsible for creating a lost generation, then we must not let what the girls tell us fall on deaf ears. We must take action now and work hard to provide all children and young people with the support they are so desperately crying out for.”

Plan International is working in Kutupalong refugee camp, running youth clubs and education programmes for children and young people. The organisation is also working to reunite unaccompanied children with their families. You can support our work by following this link.